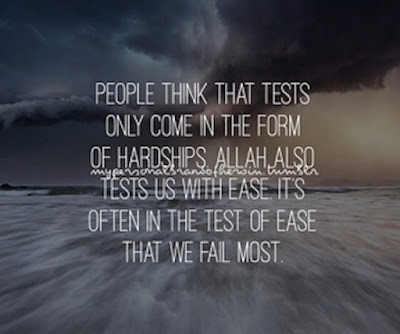 IN the Quran, God said, whoever says "We believed", will be tested. Surah Al-Ankabut, verse 1-3:


Do people think once they say, “We believe,” that they will be left without being put to the test?

We certainly tested those before them. And ˹in this way˺ Allah will clearly distinguish between those who are truthful and those who are liars.


Each and every day is a test for those who believed in HIM. There are certain degrees or levels of tests that one had to endure. Sometimes, the test is easy to handle while others are not.

Certainly, what I'm trying to share is that, currently, I think I'm being heavily tested -- and it came in many ways, many aspects, many spectrums. But I would not like to discuss it here, because it is personal and prejudice may occur.

As a believer, we have to believe that every test, every hardship is just another step for us to get closer to HIM, to know truly, who HE is.

And if the test came in the way of hardship, surely it will be followed by ease. Surah Al-Inshirah, verse 5-6:

God repeated this twice, consecutively. This shows, that we have to TRUST in HIM. Every hardship is a test for us. God will make ease for us after that. If not here, in this world, HE will be, in the afterlife.

In this situation, what we have to do is to reflect. Hardship and Eases, both are tests. But we only remember Him when the test comes in the way of hardship, while we tend to forget HIM when it came in eases. Surah Yunus, verse 12:


Whenever someone is touched by hardship, they cry out to Us, whether lying on their side, sitting, or standing. But when We relieve their hardship, they return to their old ways as if they had never cried to Us to remove any hardship! This is how the misdeeds of the transgressors have been made appealing to them.

Surely, God had tested us. We might fail for an 'x' times, but we should never stop trying to pass the tests, every time. Our belief in HIM can be increased (as well as decreased). That's why we are being tested. It's a chance to get to know HIM better, to be close to HIM, to understand HIM in a way that we are powerless, tiny creatures before HIM.